Simulates an array of Poisson processes to illustrate the use of PoissonGroup. The output is written to a ras file in the same directory.

Running the example program sim_poisson yields an output like this one

In addition the script will create a ras and a prate output file (poisson.0.ras, poisson.0.prate) as well as a log file poisson.0.log.

Our simulation has written its output (1 second of Poisson spiking from 1000 Poisson neurons firing at 5Hz) to poisson.0.ras, a human-readable ras file which contains the Poisson spikes. You can peek into the file using a text editor. However, to visualize the data you need a plotter. I generally like using gnuplot, but any other plotting software which allows reading time series data from columnar ASCII files will do (e.g. matplotlib in conjunction with numpy). If you have gnuplot installed you can take a quick peek using the command line

Either way the output will look similar to this: 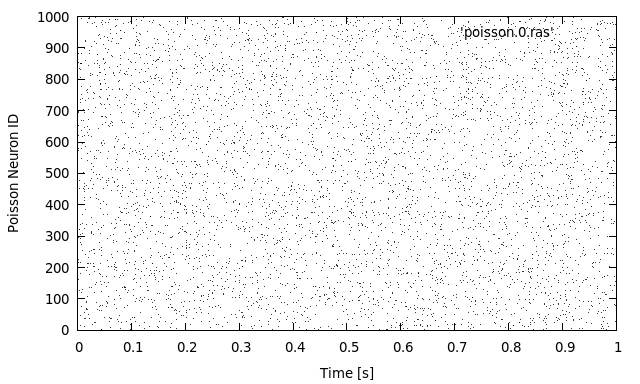 If you run the code again, you will notice that Auryn will generate the same spikes. This is due to the fact that it uses pseudo random numbers which is good for debugging. If you want to generate a different Poisson spike trains try running the code with a random seed. In this simulation this can be done with a command line parameter, but typically this will be done automatically somewhere in your code.

This simple simulation has some more parameters. To see which ones they are, you can call the script with

As you can see you can easily change a few key parameters of the simulation such as runtime, or the Poisson firing rate. It's always a good idea to export some paramters of your code through command line arguments. How this is done will become clearer in the examples. Things that require less flexibility, such as the structure of your simulation itself will be fixed in the simulation file, which is a file with C++ code. Let's have a look at this code in the present example now.

The code behind all this

The the program first creates a pointer of type PoissonGroup and assigns an instance of PoissonGroup to it. The parameters that are passed with the constructor are the size and the firing rate of the group. The call of the member seed seeds the random number generator of all PoissonGroups in a simulation, although in the present case there is only one. With these two calls our 1000 Poisson neurons are ready to be simulated and generate Poisson distributed spikes at the rate kappa (5Hz in the current simulation). To _see_ these spikes we have to either add other network components or a monitor that writes the spikes to file. We do the latter by issuing the following commands:

which creates a SpikeMonitor. The sprintf command is used to put together the output filename and store it in strbuf. To construct the actual SpikeMonitor we simply have to provide the source from where to record (for us that is the poisson group which we find via its pointer poisson), the filename where to write the spikes to (stored in strbuf) and an optional parameter specifying from how many neurons to record. Here we use size which basically means we are going to record from all neurons. In a next step we will create a PopulationRateMonitor:

Here the logic is similar as before. The rate monitor needs a source and a filename. The third parameter in this case specifies the binning of the population rate in seconds and it is optional.

Before we finally get to run the simulation we have to specify a checker. Checkers are special lightweight online-monitors. They can communicate with the System simulation environment and interrupt a run if something goes horribly wrong. This secenario is not unlikely when putting plasticity in recurrent neural networks. Although strictly speaking we do not have to expect this from our simple Poisson group, it is good practice to already get used to it here. We define a RateChecker which will kill a run if the rate of poisson rises above 20*kappa or drops below -1 (since this is obviously not possible for a firing rate this a cheap way of sayign “I do not want a lower threshold”). Last but not least the 10 tells the checker to average the rate over a 10s time window. This is also precisely the reason why when running the simulation the value displayed in the end on the command line ( f=21.3 Hz ) is much higher than the actual firing rate of 5Hz. With one second run time the internal moving average did not have enough time to reach the actual mean value.

Finally the simulation is run by issuing run the following way

here run takes at least one parameter which is the simulation time simtime. That is one second in this example. The second parameter is optional. The false in the example tells run to ignore the RateChecker that we painfully added in the last step. This does not make much sense here, but neither did the Checker in the first place. We will see that the switch is useful in other examples such as sim_background, where one can avoid checking during a transient priming period.

The full source code can be found here https://github.com/fzenke/auryn/blob/master/examples/sim_poisson.cpp